Getting the right one for your electrical housing is thus a fundamental concern to always have in mind.

This buying guide is here to help you decide on the best hinges suitable for your electrical enclosures depending on a specific design. 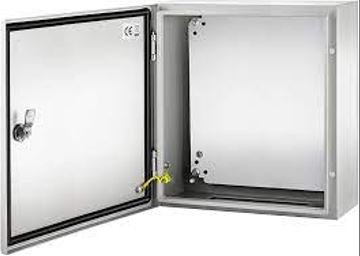 While at it, the hinge inhibits translations and rotations on the other two axes remaining.

You can consider this element as a journal bearing with one freedom degree where a shaft rotates in a hole.

Electrical enclosure hinges allow a single rotation, and this could be pitching, yawing, or rolling.

Besides, you can also go for custom designs to ensure you get what suits your application demands.

They are available in a wide range of options making

Of course, the most suitable one is based on the actual application and location of the specific electrical enclosure.

Nevertheless, the common ones used in many applications include the following;

This hinge features a longer and narrower design construction.

It spans the whole length of the electrical enclosure door or lid, guaranteeing sturdy support.

In other instances, a continuous hinge is also known as a piano hinge, given it is often used in attaching piano lids to the body.

Moreover, you can mortise this hinge to the surface they are attached to. 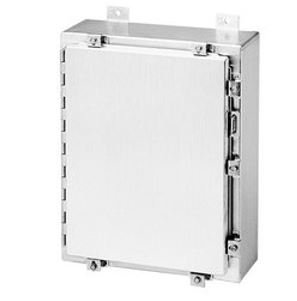 It consists of two parts, which include the arm and the hinge cup.

In many cases, concealed hinges are also referred to as Euro hinges.

They feature a relatively complex design construction and tend to have numerous elements.

You can hardly see its several features from the external section, and this makes the electrical cabinet to have a continuous appearance.

You can also adjust this type of hinges after installation, thus suitable for electrical enclosures with slight imperfections.

This hinge encompasses male and female leaves with a pin attached permanently to the male leaf.

It is quite easy to dismantle, given the male leaf is secured to the female leaf by gravity.

These hinges are relatively heavy-duty and often attached to the surface material by welding or bolting.

It also has a thick, square profile secured by a stainless steel pin for additional corrosion resistance.

In some instances, they are also known as barrel hinges.

Ideally, it consists of two barrels, with one attached to the door and frame of electrical enclosure.

This enables them to reduce friction.

It is arguably the popular type of hinge used in several electrical housings.

But hinge features a pair of leaves with numerous knuckles attached by a shaft or pin.

Ideally, one leaf is attached to moving part of the enclosure and the other one to a fixed frame.

It can be full or half mortise, depending on your application requirements.

It is a type of hinge designed to offer constant resistance as you open or close it.

The friction hinge design is to function like a butt hinge but still maintain its position for an extended period.

It develops friction in the barrel that resists motion initiated by gravity or external force.

Several materials can be used for making electrical enclosure hinges.

Often, the specific material used for these elements always determines the design and application of the electrical enclosures.

Besides, the particular material is based on the finishes to be incorporated.

Nevertheless, the commonly used materials include the following;

It is immensely durable and flexible, making it one of the most preferred materials for electrical enclosure hinges.

You can use it for both small and large electrical enclosures. 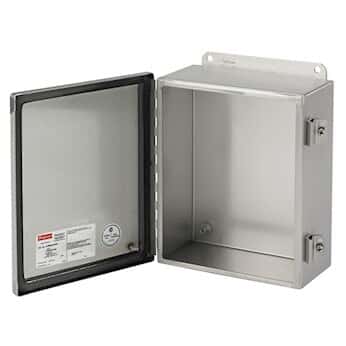 This material is quite easy to form and preferable in small electrical cabinets.

Mostly, you will find plastic hinges in small electrical cabinets.

Manufacturers of these hinges often combine nylon and propylene to make a stronger material.

You can find them in different sizes, colors, and designs hence suitable for electrical enclosures where aesthetics is also a concern.

A Plastic Hinge Fitted In An Electronic Enclosure

This material is non-corrosive, lightweight, but immensely durable.

You can also easily machine it to make custom units.

You can machine electrical enclosure hinges using various methods but mostly depending on the specific material you are using.

The main methods include the following;

This method uses high pressure to force the material against a shaped die.

Extruded hinges are often thicker and sturdy, thus in many instances comparatively expensive.

It involves putting molten metal into a mold to harden into a particular form.

Numerous finishing treatments are often integrated to enhance the aesthetic appeal of the hinges.

This process entails removing extra or unwanted material from a workpiece to create a hinge component.

You can attain this through sawing, shearing, cutting, and shrilling among other common advanced techniques.

It is a hinge forming process, which involves a thin blank sheet cut and subjected to deformation process using forming tools like dies and rollers.

Most stamped electrical enclosure hinges have immense dimensional accuracy, and you can find them at affordable rates.

Whenever you purchase electrical enclosure hinges, it is vital to consider certain factors.

Typically, a hinge has moving parts, and it is designed to carry loads exerted by moving body and external loads.

As such, it is imperative to consider various design factors such as the following;

It refers to how the hinge rotates or moves in relation to the electrical enclosure door.

Ordinarily, hinges can either be left or right-handed.

However, the ideal choice in such a case is dependent on the swing or type of enclosure door.

Electrical cabinet hinges are exposed to an environment likely to affect material specification.

Hence, it is advisable to consider stainless steel material for applications that need strength and corrosion resistance.

Plastic hinges are ideal for corrosion resistance but not necessarily for strength.

The load electrical enclosure hinge is to carry is a vital consideration.

It determines the dimensions and material required for the specific application.

Consider the moving part weight and that of external and dynamic loads.

The method of fastening the hinge on electrical enclosure surface is another factor to consider.

Establish whether you want to weld, screw or bolt the hinges to the frame and moving part.

Some electrical cabinet hinges may have limited angular movement.

Thus, the part may need to rotate 90 or 180 depending on application.

It is, therefore, important to determine whether the space can accommodate a door swing.

Also, figure out if the swing is likely to affect access through the door.

Hinges used for electrical enclosures in different applications usually have great aesthetics imparted on them.

As such, aesthetics may need hinges concealed for the electrical enclosure to have a continuous, uninterrupted appearance.

Methods Of Attaching Electrical Enclosure Hinges To The Frame

There are several ways you can use to fix hinges on surface of electrical enclosures.

Ideally, the suitable method is dependent on several factors such as weight, orientation, aesthetics, and required end play among others.

Even so, here are the main techniques you can use to attach this component in respective electrical housing;

Typically, these hinges are used in electrical enclosures used in a wide range of applications such as the following; 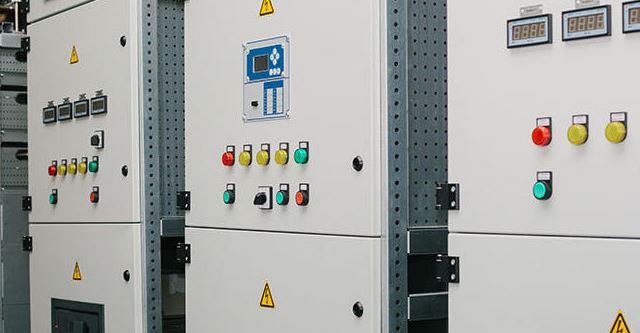 It is important because it enhances the efficiency, performance, safety, and reliability of these components in various applications.

Some notable quality and safety standards for this component to look into include the following;

You can find electrical enclosure hinges in various surface finishing.

Of course, the ideal one depends on the specific hinge material and the application.

The popular ones include the following;

Majorly, the specific manufacturer you are purchasing from plays an integral role in establishing the amount of money you’ll spend on this component.

Some companies often sell these products expensively, whereas you can find them at affordable rates in other manufacturers.

Also, the particular material used for making the electrical enclosure hinges is a determinant factor of cost.

The quantity of electrical enclosure hinges you are purchasing at the same time also defines the actual price.

Again, whether you need custom or standard designs also determines the cost of electrical cabinet hinges.

Custom hinges are a bit pricey based on the extent of customization incorporated.

Standard hinges, on the other hand, are more affordable.

Moreover, the exact type of electrical enclosure hinges you are purchasing also informs the actual cost.

Hence, there is no fixed price for electrical enclosure hinges. It all depends on many factors, including the above-mentioned ones.

The main ones include the following;

Pin – A shaft or rod running through the knuckles holding the leaves.

Leaf – Plate extending laterally from barrel or knuckle. It is attached to moving or fixed parts by welding, gluing, or screwing.

Barrel – Also known as knuckle, it refers to a hollow cylinder attached to a leaf where the pin is slid through.

Production process of electrical enclosure hinges is based on numerous elements including hinge profile, available technology, cost and material.

Usually, these elements are the weak point in an enclosure hence the need for ensuring you get the most suitable one for your application needs.

Contact us now for all your electrical enclosure hinges and accessories.